Glicerine – refined glycerol is a high purity product suitable to be used in applications such as PHARMACEUTICAL, FOOD and COSMETIC formulations where very strict quality standards are required. Its THERMAL STABILITY allows its use in applications or manufacturing processes where stressing operative conditions are applied. 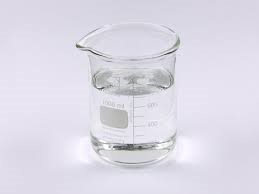 Polyglycerols: are inter-molecular glycerol ethers formed by the condensation of “n” (2 or more) glycerol molecules with elimination of “n-1” water molecules. Spiga Nord S.p.A. exclusively manufactures these products by polycondensation of Kosher and Halal grade and GMO-free Natural Refined Glycerine.

Diisononyl phthalate (DINP) is a phthalate used as a plasticizer. DINP is typically a mixture of chemical compounds consisting of various isononyl esters of phthalic acid, and its commonly used in a large variety of plastic items. 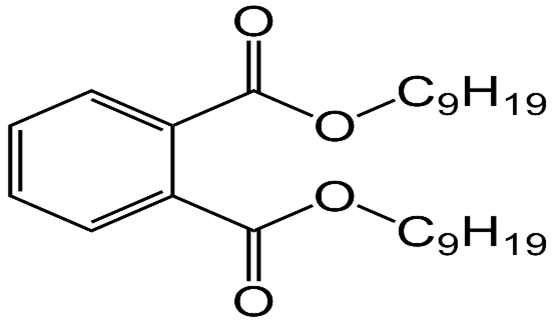 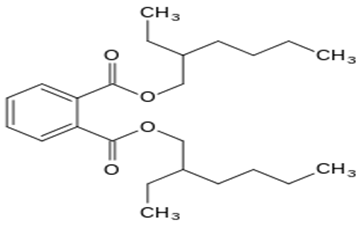 Due to its suitable properties and the low cost, DEHP is widely used as a plasticizer in manufacturing of articles made of PVC. Plastics may contain 1% to 40% of DEHP. It is also used as a hydraulic fluid and as a dielectric fluid in capacitors. DEHP also finds use as a solvent in glowsticks.

Cyclohexane dicarboxylic acid diisononyl ester (DINCH) is a mixture of organic compounds with the formula C6H10(CO2C9H19). DINCH is colorless oil. It is used as a plasticizer for the manufacture of flexible plastic articles in sensitive application areas such as toys, medical devices, and food packaging. It is of interest as an alternative for phthalate plasticizers, which are implicated as endocrine disruptors.

Dioctyl adipate (DOA) is an organic compound with the formula (CH2CH2CO2C8H17). It is a colorless oily liquid. As well as related diesters derived from 2-ethylhexanol, decanol, isodecanol, etc., it is used as a plasticizer.

Plasticizers are used to soften rigid PVC (polyvinylchloride) and to turn it from being hard and brittle to soft and flexible. Because of high safety standards and extensive testing, DINCH is recommended whenever people are in close contact with PVC products that contain plasticizers.

DINP is the most used plasticizer, but it is fully interchangable with DIDP and in some aplications also with DOTP. 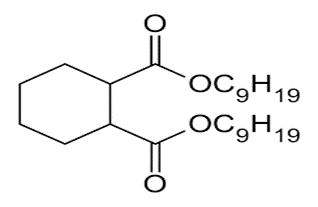 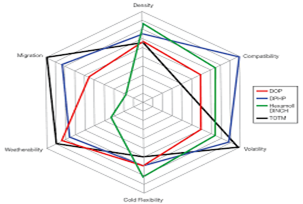 DOT Diisodecyl phthalate (DIDP) is a commonly used plasticizer used in the production of plastic and plastic coating to increase flexibility. It is a mixture of compounds derived from the esterification of phthalic acid and isomeric decyl alcohols.

The coating on furnishings, cookware, pharmaceutical pills, food wrappers and many other products may have DIDP or other phthalates in them.

Dioctyl terephthalate (bis(2-ethylhexyl) benzene-1,4-dicarboxylate or Di(2-ethylhexyl) terephthalate), commonly abbreviated DOTP or DEHT, is an organic compound with the formula C6H4(CO2C8H17). It is a non-phthalate plasticizer, being the diester of terephthalic acid and the branched-chain 2-ethylhexanol. This colorless viscous liquid used for softening PVC plastics is known for chemical similarity to general purpose phthalates such as DEHP and DINP, but without any negative regulatory pressure. It possesses very good plasticizing properties and may be used as a direct replacement for DEHP and DINP in many applications.

DOTP is a general purpose plasticizer that is considered safer than ortho –  phthalate  plasticizers due to its reduced toxicity profile. The terephthalates exhibit none of the peroxisome proliferation of liver enzymes that some ortho–phthalates have shown in several studies. It has uses in applications like extrusion, calendering, injection molding, rotational molding, dip molding, slush molding and coating.

In case you need help, would like to send an inquiry or have a question, you can contact us at any time.